Achyut Ananda was born on April 20, 1965, in the Cuttack District village of Kalarabanka, Odisha. At the age of four, he lost his father. Along with his mother and seven siblings, he had to deal with hardship. At a young age, he worked as a manual laborer. He helped his mother out around the house and on the farm to get money for the family. His graduate work in chemistry was done at Utkal University. He was a lecturer at Utkal University’s Maharshi College. He launched KIIT and KISS in 1992. He has made significant contributions to the advancement of professional and health education. He made contributions to the growth of spiritualism, literature, movies, and the arts. He turned Kalarabanka, his hometown, into a model community by offering city amenities and converting the panchayat into a smart panchayat. 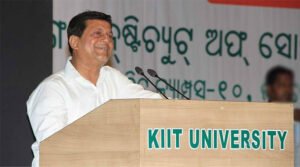 The KIIT Group of Institutions and the Kalinga Institute of Social Sciences were founded by Achyuta Samanta. He is the founder of the charitable organisation Art of Giving in the Indian state of Odisha. Instead of focusing on worldly wealth, he constantly sought ethical principles in life. The Kalinga Institute of Social Sciences (KISS), which he founded, is a top-tier university that oversees several institutes and focuses on the upbringing of disadvantaged tribal children. KISS offers free education from kindergarten through post-graduation to more than 250,000 tribe members. The Government of India acknowledges these as having received an A grade from the Ministry of HRD. The KIIT University offers education to KISS students in fields like medicine, dentistry, engineering, etc.

A Humanitarian, a Statesman, and an Educator

Professor Achyuta Samanta is an advocate for education, a humanitarian, and a statesman. In addition to his contributions to the disciplines of education and social service, he has made significant contributions to spiritualism, rural development, tribal upliftment, art, culture, literature, and the media. He was given the opportunity to run for the Rajya Sabha in 2018 after being recognised for his excellent contributions to tribal welfare and education in Odisha. He was a Biju Janta Dal member of the Rajya Sabha who was elected, and in 2019, he ran for office in the Odisha district of Kandhamal. His goal is to turn Kandhamal into a model constituency while serving as an elected member of the Lok Sabha.

Prof. Achyuta Samanta has inspired millions of people worldwide with his life and work and via his signature initiatives, the Art of Giving, Kanya Kiran, and Education for All. He lives in a modest two-room flat in Bhubaneswar, Odisha, is a bachelor who is married to his job, and has no real estate to his name.

Samanta won numerous accolades and broke numerous records in the social entrepreneurial sector.He is listed as the youngest chancellor of an Indian university in The Limca Book of Records.

In 2019, he received the Personality of the Year by the Federation of Indian Chambers of Commerce & Industry, the Golden Gavel Award by the World Academy of Arts and Culture, and the Outstanding Green Activist Award by the India Green Energy Awards organized by IFE.